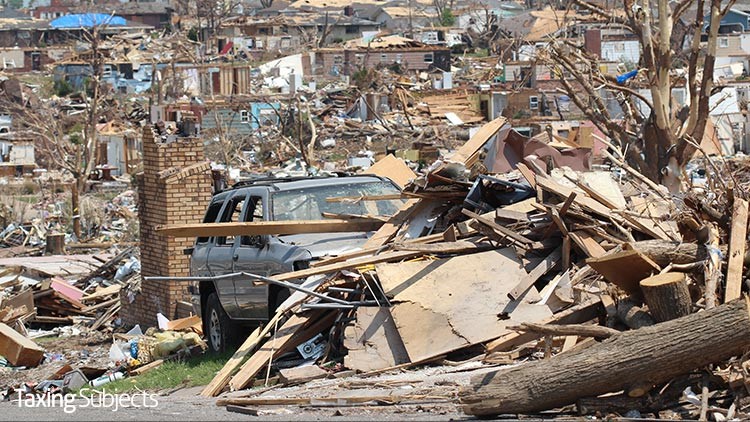 Victims of the recent tornadoes that swept through Tennessee have gotten some tax relief from the Internal Revenue Service. Taxpayers in the storm-wrecked areas will have until July 15 to file various individual and business tax returns—and to make their tax payments.

The IRS says the relief is available in any area that has been designated by the Federal Emergency Management Agency (FEMA) as qualifying for individual assistance. At present, that designation has been granted to taxpayers in Davidson, Putnam and Wilson counties of Tennessee, but other areas may be added later. Taxpayers in towns or counties added later will have the same relief.

Check the disaster relief page on the IRS website for the latest updates on qualified areas.

The IRS’ action postpones various tax-filing and payment deadlines that started on March 3. Now, individual taxpayers and businesses in the qualified areas have until July 15 to file their returns and pay any tax due. This would include not only individual tax returns normally due April 15, but the various 2019 business returns that would be due March 15.

The relief terms also mean affected taxpayers will have until July 15 to make their 2019 IRA contributions. For businesses, any penalties on payroll and excise tax deposits normally due on or after March 3 and before March 18 will be abated by the IRS as long as the deposits are made by March 18.

There’s no need for a taxpayer in any of the affected counties to contact the IRS to see if they qualify. The IRS systems are programmed to automatically give the specified relief based on the taxpayer’s address on file.

However, if taxpayers outside the FEMA-designated counties claim losses of records that affect their ability to meet an IRS deadline, they should call the IRS at 866-562-5227. This also includes workers assisting the relief activities who are affiliated with a recognized government or philanthropic organization.

If an affected taxpayer gets a late filing or late payment notice from the IRS with a deadline date that falls within the postponement period, the taxpayer should call the phone number on the letter to have the penalty abated.

The IRS says both individuals and businesses within the federally declared disaster area who had uninsured or unreimbursed losses related to the disaster can choose to claim them on either the return for the year the loss occurred (in this case, the 2020 return to be filed next year), or the return for the prior year. That means taxpayers can, if they choose, claim the losses on the 2019 return they are filling out this tax season.

Taxpayers who file a return with losses from the Tennessee storms should remember to include the FEMA declaration number—4476—on the return. For more details, check out Publication 547.