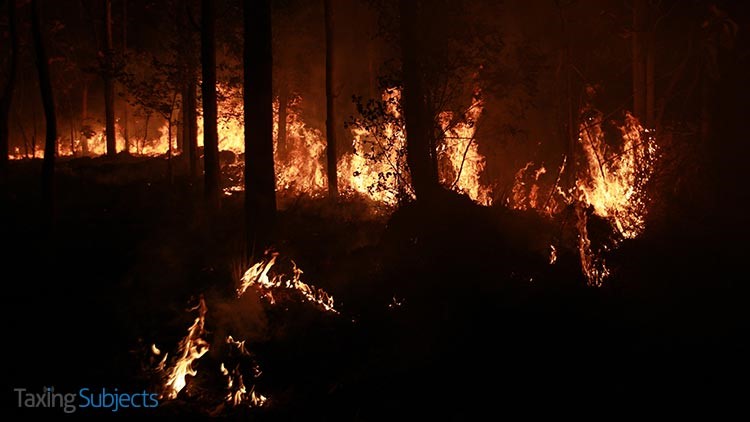 Many Oregon taxpayers are dealing with the damage caused by recent wildfires and severe storms. While victims have been forced to flee their homes beneath a smoky, orange sky, at least they have one less thing to worry about: The looming October 15 tax extension deadline.

The Internal Revenue Service yesterday announced, “Victims of the Oregon wildfires and straight-line winds that began on September 7 now have until January 15, 2021 to file various individual and business tax returns and make tax payments.” Here’s a list of some tax-related deadlines that are affected by the relief:

The IRS also says that “penalties on payroll and excise tax deposits due on or after September 7 and before September 22 will be abated as long as the deposits are made by September 22, 2020.” Keep in mind that this tax relief does not apply to the July 15 tax payment deadline.

Who qualifies for tax relief due to Oregon wildfires and straight-line winds?

You can qualify for the new tax extension deadline if the Federal Emergency Management Agency has officially declared where you live to be a “disaster area.” Currently, the following counties have been identified for tax relief:

Be sure to bookmark “Tax Relief in Disaster Situations” on the IRS website for the most up-to-date list of affected areas.  As with other natural disasters, the areas eligible for relief may grow depending on the path taken by the fire and storms. Even if no further damage is caused, FEMA can still continue to identify areas for relief as they continue surveying the situation.

What do I have to do to qualify for wildfire tax relief in Oregon?

If the address on record with the IRS falls inside a disaster area, you don’t have to do anything to benefit from the new deadlines. That isn’t to say that people won’t receive late-filing notices from the IRS. In that case, the IRS says “the taxpayer should call the number on the notice to have the penalty abated.”

Relief workers, charities, and taxpayers who have business dealings inside the disaster area may also qualify for tax relief. These individuals and organizations will need to call 866.562.5227 to speak with IRS representatives to receive tax relief.

Is tax relief available for other disaster areas?

Since hurricanes, tornadoes, and earthquakes seem to be a permanent fixture in national headlines, it’s important to remember that this tax relief generally becomes available whenever any large-scale natural disaster strikes. If you are the victim of a recent natural disaster, visit the IRS disaster relief page to see if your area has received tax relief.