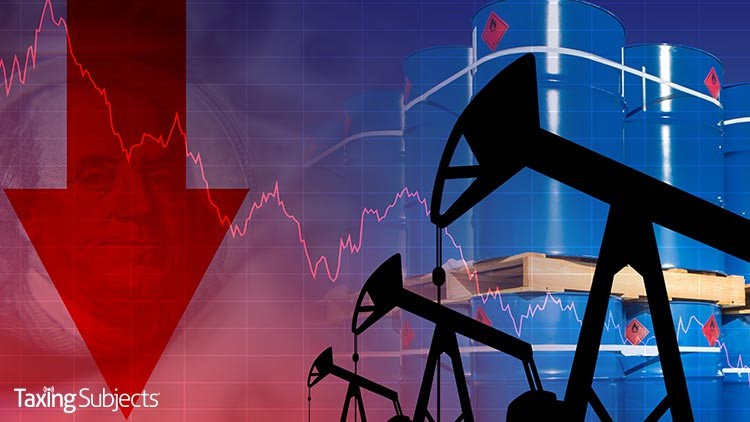 While most of the news is about the coronavirus these days—for good reason—some state governments are finding their bottom lines may fall ill due to rapidly falling oil prices.

In April, the price for West Texas Intermediate crude oil, the benchmark for crude oil produced in the U.S., saw its May contract plummet to a new low: -$37 per barrel. Yes, that’s minus $37. Just the year before, in May 2019, WTI crude was selling at $71 per barrel.

An article written for the Tax Foundation, a leading tax policy center, finds some states’ lopsided dependence on oil revenues could prove to be a serious flaw in their finances. Ulrik Boesen reports the price of June contracts has improved somewhat in recent weeks, rebounding closer to the $20-a-barrel mark, but experts warn the gains may not continue for long.

If the downward slide continues, Boesen writes, it will have “a severe impact on the states that collect significant parts of their state revenue from oil severance taxes.” A double-whammy of low oil prices and the economic downturn from the coronavirus pandemic could give these states a lot to worry about.

Boesen finds two states in particular, Alaska and North Dakota, rely on oil-related taxes for much of their overall tax revenue. Alaska, for example, collects 50% of its revenue from oil severance taxes; a total of 81% of Alaska’s revenue comes from taxes levied on the oil industry.

North Dakota fares better, but only marginally, collecting 53% of its revenue from severance taxes. Other states pulling in significant tax money from the oil industry include Wyoming at 22%, and New Mexico at 20%. Wyoming and New Mexico, Boesen notes, also generate a hefty portion of state tax revenue from severance taxes on oil extraction besides the other taxes paid by the oil companies.

But there’s more than just these direct tax payments by oil companies to be lost. These states also collect state taxes from corporate and personal income taxes, property taxes and royalties—all related to the oil industry. And oil production frequently also supports vendors and service suppliers, which lead to more local jobs in the communities where they operate and more state taxes generated.

Boesen’s article spotlight’s Alaska and North Dakota since these two states are the most vulnerable to the current circumstances, but Boesen stresses other states with significant revenue from the oil industry could also experience fiscal distress as well.

No easy way out.

The April downturn marked the first time a West Texas Intermediate contract had entered negative territory. Boesen notes that it happened because the cost of drilling, extracting, and storing the oil outweighed the profit from selling it. The price decline was sparked by a price war between Saudi Arabia and Russia, and then simply made worse by a slump in demand due to the coronavirus.

Global demand is estimated to be down 30% because of the pandemic.

The crucial aspect of the oil production equation, Boesen writes, is demand. And demand—or lack of it—is what drives this change:

“The demand is key because some oil futures contracts are settled physically, which means that the owner of any contract will receive the physical oil. This fact added urgency to the market as May contracts, which traded at a negative value, expired on April 21. May contracts have to be settled in the delivery month (May) in Cushing, Oklahoma, where contract owners must take possession of the oil. However, refinery capacity across the country is down because demand is down, which means oil is simply sitting in storage in Cushing with no capacity to book any more local storage.”

To make matters worse, it’s not easy to turn off an oil well without damaging the well. That means production of oil continues even if there is no demand.

Looking ahead, Boesen observes that June contracts are currently trading in positive territory, supporting the idea that the cost of refining and storage of oil is what is driving the price of May contracts downward. Even so, if demand doesn’t increase while the storage situation remains the same, upcoming contracts could see similar pricing.

Alaska and North Dakota could be at risk.

The oil business has been very good to Alaska; in 2012, oil and gas production taxes generated $6.15 billion for the state. Oil-related rents and royalties brought in another $2.04 billion. Corporate income taxes from the petroleum industry supplied $568.8 million.

That same year, oil and gas taxes yielded $8.86 billion of Alaska’s $9.5 billion unrestricted general fund—accounting for 93% of the fund’s revenues.

The Alaska Oil and Gas Association estimates the oil industry supports more than 77,000 jobs in the state.

More recent figures are much different, to say the least.

Boesen writes that this year, non-petroleum revenue stood at nearly $503 million while oil and gas revenue dropped from an inflation-adjusted $9.9 billion to a projected $1.5 billion.

The Alaska Department of Revenue had initially predicted oil prices would hover around the $60-per-barrel mark this year. But by March its Legislative Finance Division had scaled that guess back, saying lower prices would add $300 million to the state’s deficit in 2020 and $600 million in 2021. Boesen says even those numbers appear to be underestimates now.

Down south, North Dakota is also eyeing the financial fallout from historically low oil prices. The state’s 2019-2021 biennium budget previously predicted North Dakota would pull in nearly $5 billion in oil industry taxes, based on an estimated oil price of $48 per barrel.

The University of North Dakota now estimates price drops will cut tax revenue by 12%, but that calculation was made when oil was trading at $21 per barrel. If the price slump continues, the effects could be worse.

North Dakota did not institute a stay-at-home order to combat COVID-19, opting instead for a targeted approach that closed bars, restaurants, gyms, theaters and schools.

According to the state’s Department of Mineral Resources, production in North Dakota doesn’t have much room for growth. Boesen writes that means North Dakota—like Alaska—should start thinking about how to plan for a new era: one with reduced oil revenue.

Boesen concludes that Alaska and North Dakota are just two examples of how the pandemic and other economic factors can pair up to create a perfect storm for some states. “The impact on the oil industry is just one example in an unfortunately growing list of economic downturns. The industry supports tens of thousands of jobs across the country and this crisis could have a long-lasting impact on the communities supported by these jobs.”

Our thanks to Ulrik Boesen and the Tax Foundation for their original article.