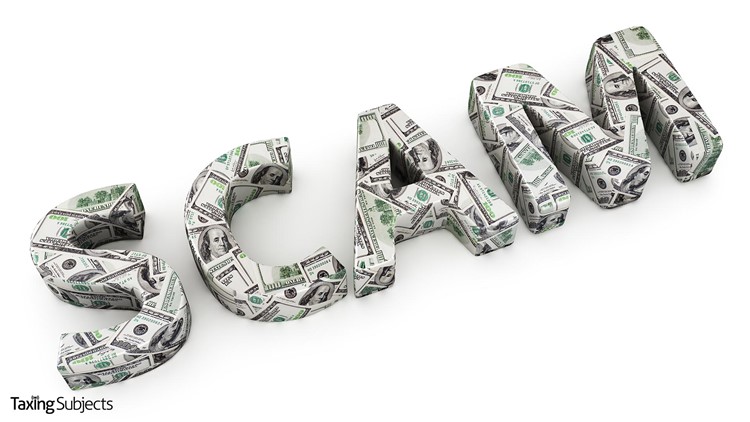 Every tax season, the Internal Revenue Service releases what it terms the “Dirty Dozen” list of top tax scams. While some of the scams listed may not change from year to year—if the bad guys find a scheme that works, they stick with it—some of the plays do change nonetheless.

This can be loosely defined as any effort aimed at fooling the recipient into providing personal or professional information. For taxpayers, that would be SSNs and passwords; from tax professionals, the crooks are seeking e-Services passwords, EFINs, and anything else they can use to access client data.

Phishing attacks have been a major source of stolen data for crooks; bogus websites, official-looking fake emails, and links that infect computers with malware to give the scammer an open door to files are all common tools of the scam artist or identity thief. And it’s not just taxpayers who are likely see a phishing campaign. Criminals are increasingly targeting tax professionals, deploying various types of bogus phishing emails in an attempt to access client data.

When tax season rolls around every year, the IRS usually gets an upswing in complaints about scam phone calls from crooks. The calls generally threaten some sort of legal action such as arrest, deportation or license revocation if the recipient doesn’t pay a non-existent tax bill. The ruse is embellished by fake IRS employee titles and “badge numbers” used by the phone scammers. They may even know the taxpayer’s name and SSN.

Phone scams seem to be very adaptable by the crooks. Most share some basic tactics, though. In general, the playbook goes something like this: the con artists make unsolicited telephone calls claiming to be IRS officials. They convince the victim to send cash, usually through a wire transfer or prepaid debit or gift card. They might leave an “urgent” callback number via a “robo-call,” or a phishing e-mail.

While the IRS and its industry partners have made headway in battling tax-related identity theft, it still is significant and earns the third spot in this year’s “Dirty Dozen.”

Tax-related identity theft is defined as when a stolen Social Security number or Individual Taxpayer Identification Number (ITIN) is used to file a fraudulent tax return claiming a bogus refund.

The IRS has seen real results in working with state taxing agencies, Drake and other tax industry leaders. A recent post from the IRS gives us encouraging numbers:

And it’s not just individual taxpayers who should worry about tax-related identity theft: cyber-crooks also file fraudulent Forms 1120 using stolen business identities, so businesses should be just as concerned.

According to the IRS, some 56 percent of taxpayers choose a tax professional to prepare their tax returns. And while the vast majority of tax pros provide honest, high-quality service, we’ve seen scammers posing as tax professionals to lure in unsuspecting taxpayers. And every season we see the reports of some dishonest preparers who operate their businesses only as a vehicle for refund fraud, identity theft and other schemes.

The IRS reassures taxpayers this way: “The IRS is working to protect taxpayers from shady return preparers. The pursuit of illegal scams can lead to significant penalties and interest as well as possible criminal prosecution. IRS Criminal Investigation works closely with the Department of Justice to shut down scams and prosecute the criminals behind them.”

Scammers in this enterprise use a legitimate reason for taxpayer donations, such as natural disaster relief, and collect them with a bogus organization. Sometimes the scammers pose as a real charity—with a name that’s close, but not identical to the real thing—and online links that go to the scammer’s web page. Other times, the “charity” sounds legitimate, but is totally fake and simply channels whatever donations are made straight to the thief.

Sometimes the charade goes beyond spoofing a real charity online. Scammers also call taxpayers, posing as a real charity. The taxpayer thinks they’re donating to a worthy cause, but they’re only being fleeced.

Think of this tactic as a means to an end for scammers. They pose as tax preparers during tax season, promising big federal refunds in advertisements and phony storefronts. To get those big refunds, they make false claims for deductions or credits on returns. Then, when the refund is paid, the scammer gets the lion’s share.

The game plan varies among crooks; some file phony Forms 1099 or W-2; others attempt to use a bogus 1099-OID in order to illegally leverage a refund. Still others invent dependents for the Earned Income Tax Credit (EITC).

Both the research credit and the fuel tax credits have been targets of scammers. While these credits have legitimate uses, scammers inflate them on business returns to generate large refunds. Unsupported claims for either credit can result in penalties for the taxpayer, so vigilance is paramount.

Overstating deductions and credits such as the Earned Income Tax Credit, the Child Tax Credit, charitable contributions or business expenses is a common trick used by tax fraud scammers and unscrupulous tax preparers alike. The IRS says some taxpayers may also be tempted to overstate deductions themselves in hopes of bigger refunds or smaller tax bills. The IRS urges caution on the part of taxpayers, since they’re ultimately responsible for the accuracy of their tax return—even if it is prepared by someone else. Overstated claims for deductions and credits could trigger an audit—or worse, result in penalties and interest levied by the IRS.

Some people falsely increase the income they report to the IRS. This scam involves inflating or including income on a tax return that was never earned, either as wages or self-employment income, usually to maximize refundable tax credits.

Much like falsely claiming an expense or deduction is improper, claiming income the taxpayer didn’t earn is also improper. Unscrupulous return preparers and taxpayers do this to secure larger refundable credits such as the Earned Income Tax Credit and it can have serious repercussions, including interest, penalties, and in some cases, criminal charges.

Tax law generally allows businesses to create “captive” insurance companies to protect against certain risks and in the process, reduce the taxpayer’s insurance expense. Under section 831(b) of the tax code, captive insurers that qualify as small insurance companies can elect to exclude limited amounts of annual net premiums or reinsurance premiums from income, so the captive insurer pays tax only on its investment income.

However, in certain “micro-captive” structures, promoters, accountants or wealth planners persuade owners of closely-held entities to participate in schemes that lack many of the attributes of genuine insurance. These “micro-captive” arrangements attempt to offer the taxpayer the tax break of insurance, without actually providing the legal protection of true insurance. Without the commonly accepted benefits of insurance, the U.S. Tax Court has ruled, such tax shelters should not be considered “insurance.”

Promoters of frivolous schemes encourage taxpayers to make unreasonable and outlandish claims about the legality of paying taxes despite being repeatedly thrown out in court. The penalty for filing a frivolous tax return is $5,000. Check out the IRS’ “The Truth about Frivolous Tax Arguments” for the whole story.

Basically the act of taking unreported income and hiding it in secret offshore or foreign bank accounts, this member of the “Dirty Dozen” is responsible for billions of dollars in criminal fines and restitution. The IRS Offshore Voluntary Disclosure Program (OVDP) has brought more than $11 billion back home with more than 56,000 voluntary disclosures since it began in 2009. The program will come to a close in September of this year.

The IRS has also conducted civil audits in a separate effort that have resulted in payment of tens of millions of dollars in unpaid tax.

Coming up next time: How to Avoid the Dirty Dozen.