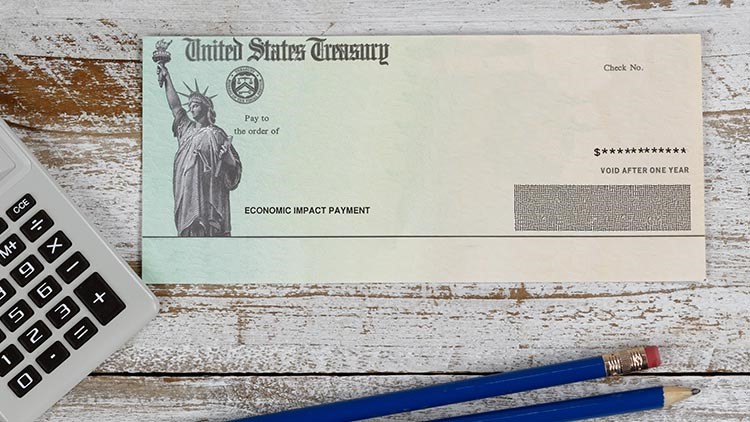 As the old phrase goes, things are looking up.

The Internal Revenue Service says more Economic Impact Payments (EIP3) are coming this week—a second round that will include paper checks and prepaid debit cards.

Taxpayers getting direct deposits will see a deposit date of Wednesday, March 24, with some recipients getting their deposits even sooner. Some of those may be shown as provisional or pending deposits.

The IRS says "a large number of this latest batch of payments will also be mailed, so taxpayers who do not receive a direct deposit by March 24 should watch the mail carefully in the coming weeks for a paper check or a prepaid debit card, known as an Economic Impact Payment Card, or EIP Card."

The good news: No action is needed by most people who are eligible for EIP3. But if they want to see the status of their payment, the Get My Payment tool on IRS.gov has that information.

While the IRS is now distributing EIP3 to some taxpayers through the mail, the agency reminds that "the vast majority of taxpayers receiving EIPs will receive [their payment] by direct deposit." One reason EIP3 will be quickly distributed by direct deposit is a partnership between the IRS and the Bureau of the Fiscal Service.

"The IRS and the Bureau of the Fiscal Service leveraged data in their systems to convert many payments to direct deposits that otherwise would have been sent as paper checks or debit cards," the IRS says. "This accelerated the disbursement of these payments by weeks."

Keep an eye on the US Mail

Since the IRS is sending some of payments by mail, the agency is reminding taxpayers who normally receive physical refund checks to keep an eye on their mailbox.

"More people are receiving direct deposits, while those receiving them in the mail may get either a paper check or an EIP Card—which may be different than how they received their previous stimulus payments," the IRS notes. "IRS and the Treasury Department urge eligible people who have not received a direct deposit to watch their mail carefully during this period."

But what will the envelopes containing EIP3 checks and debit cards look like? Here's what the IRS says:

Unlike some commercially available prepaid debit cards, EIP cards cannot be reloaded: Once the IRS-loaded funds are spent, that's it. Those who previously received an EIP card will get a new card for EIP3. However, EIP cards do function like most debit cards in other ways.

"EIP Card recipients can make purchases online or in stores anywhere Visa Debit Cards are accepted," the IRS explains. "They can get cash from domestic in-network ATMs, transfer funds to a personal bank account, and obtain a replacement EIP Card if needed without incurring any fees. They can also check their card balance online, through a mobile app, or by phone without incurring fees."

What are the basics for EIP3?

In this third round, the amount of an eligible individual’s payment will generally be based on their latest processed tax return from the previous two years. According to the IRS, "this includes anyone who registered online at IRS.gov using the agency's Non-Filers tool last year or submitted a special simplified tax return to the IRS." Taxpayers who have already filed this year will have their tax-year 2020 return information used instead.

As with EIP1 and EIP2, most recipients of federal benefits will automatically receive EIP3, like those provided by the following:

However, the IRS says that some non-filers may still need to file a return to claim the dependent portion of EIP3. "People in this group should file a 2020 tax return to be considered for an additional payment for their dependent as quickly as possible," the agency urges.

Another aspect setting this third round of Economic Impact Payments apart from the other two is it’s adjusted gross income (AGI) phase-out range:

EIP3 is completely zeroed out for those whose AGI exceeds the top end of the range, which, as the IRS points out, "means that some people won't be eligible for the third payment even if they received a first or second Economic Impact Payment or claimed a 2020 Recovery Rebate Credit."

The IRS closes the release by noting that Fact Sheet 2021-05, Updated details about the third round of Economic Impact Payments, contains more information about EIP3.