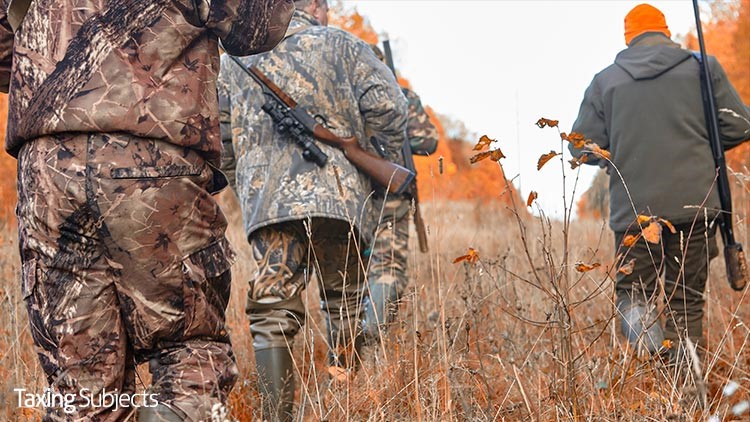 It’s not often that a federal tax gets high marks for its results, but the Tax Foundation points to one in particular that hits the bullseye. The foundation’s Ulrik Boesen writes that an excise tax on firearms and other hunting and fishing gear is feeding tax proceeds back into projects that ultimately benefit outdoorsmen paying the tax.

In March, David Bernhardt, the Secretary of the Interior, announced that the U.S. Fish and Wildlife Service will distribute nearly $1 billion as a result of this excise tax. The proceeds will go to state and territorial fish and wildlife agencies for conservation and recreation projects.

The source of this windfall, Boesen writes, is “a rather well-designed excise tax” that is paid by anyone who buys firearms or other hunting or fishing equipment. The tax goes all the way back to 1937, when the National Firearms Act went into effect. Archery items were added to the list of taxable items in 1972.

The excise tax on fishing equipment was established by the Dingell-Johnson Act in 1950.

How does the tax work?

Here’s how the parts of the excise tax work.

When you put it all together, Boesen writes, the excise tax covers everything from arrows to bullets to fishing tackle.

The revenue raised by this tax is collected by the federal government, allocated to the Wildlife Restoration Fund and the Sportfish Restoration Fund, then handed over to the states’ conservation programs. The money is apportioned based on land area of each state and the number of hunting and fishing licenses it issued.

Recreational boaters also pay into the fund through the fuel taxes on motorboats and small engines. By design, the tax basically works as a user fee for hunters and fishermen, where the purchase of equipment acts as a stand-in for the buyer’s use of recreational outdoor activities. In addition to the federal tax, states often sell licenses to further support wildlife management and conservation.

Figures supplied by the Tax Foundation show Texas leading the states in the amount of tax proceeds it receives. The Lone Star State raked in more than $46 million for it conservation programs; in the East, the leader was Pennsylvania, which tallied over $29 million.

Because the tax respects the benefit principal so well, Boesen writes, the tax has the general support of America's sporting and outdoor community, and that teaches us some lessons about well-designed excise taxes.

“While some may consider a well-designed excise tax an oxymoron, excise taxes can be an effective tax tool. A guiding principle is that excise taxes should only be levied when appropriate to capture some externality or to create a “user pays” system—not as a general revenue measure,” Boesen writes. “Due to their narrow base, they are not a sustainable source of revenue for general spending priorities.”

Sadly, not all excise taxes are so well crafted in light of the benefit principal or even the principles of sound tax policy. Some states tax car rentals to fund project like sports stadium construction and amateur sports. Colorado taxes sports betting in order to fund water conservation. And Philadelphia taxes soda to fund educational programs.

Boesen says revenue from excise taxes should be “appropriated to relevant spending priorities,” as with the outdoor equipment example. He adds, excise taxes should be constructed according to the principles of sound tax policies, meaning they should have neutral equitable rates, clear definitions and simple collections.

A well-constructed tax can take a seemingly external issue and tie it to the direct interests of those who pay the tax. An excise tax on gambling that funds gambling addiction prevention programs is one example.

A gas tax can also be a good example of a tax acting as a user fee. The purchase of fuel acts as a proxy for road usage—the more gas you buy, the more you drive on the roads.

Some excise taxes are designed to decrease the incentive to consume a product. Often called sin taxes, these are frequently levied against alcohol, tobacco and, more recently, marijuana. Of course, Boesen writes, a single excise tax can also support more than one of these strategies.